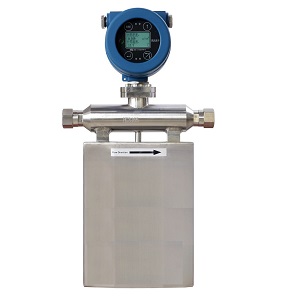 In the exchange of fluid commodities, it is often settled in terms of quality. Accurate fluid mass measurement has always been an often desired end goal. Before the mass flow meter was widely used, the volume flow measurement was regarded as the only feasible method, but the batch weighing method required complicated conversion and caused significant errors due to changes in fluid parameters.

Coriolis effect flowmeter operates according to the principle of Newton's second law of motion, that is, the application of force=mass×acceleration (F=ma). From the formula F=ma, the important concept is that if a force is not applied to the object and the acceleration caused by it is measured, then the mass cannot be measured. The flowmeter is based on the fact that the fluid is in a rotating system while the fluid is moving in a straight line, and the vibrating tube mass flowmeter is designed ingeniously by combining these two movements. Although there are many shapes of vibrating tubes, they are generally divided into two types: curved tubes and straight tubes, among which there are single tubes and double tubes. Since the principles are the same, for simplicity, a U-shaped single tube is used here.
The flowmeter drives the U-shaped tube (flow sensing tube) fixed inside the instrument shell with an electromagnetic drive system to make it vibrate, as shown in the figure).

When a fluid flows through a vibrating tube with a fixed frequency, the fluid is forced to accept the vertical momentum of the tube. During the vibration half-cycle of the upward movement of the tube, the fluid flowing into the instrument presses downward against the upward force of the tube, whereas the fluid flowing out of the instrument has an upward force, which resists the reduction of the vertical momentum of the tube and pushes the tube upward.
The combination of the two forces causes the flow conduit tube to twist, which is the Coriolis effect. During the other half cycle of the vibration, the tube moves downward, and the twist is in the opposite direction. The amount of twist of the sensing tube is directly proportional to the mass flow of the fluid. The measurement of the twist angle can be realized by photodetectors or electromagnetic sensors located on both sides of the flow sensing tube, and the speed of its vibration can be monitored. There is a time difference between these two velocity signals due to the twisting of the tube. The Coriolis effect mass sensor transmits this signal to the transmitter, which processes and converts the signal into an output signal that is directly proportional to the mass.

Coriolis effect mass flow meter has become an important, widely used and mature flowmeter for fluids mass flow measurement, because it does have advantages that other meters can't match, such as.

From the principle of the flowmeter, it can be known that it is to measure the small torsion angle of the flow detection tube during the natural vibration. Therefore, during the application of the flowmeter, the vibration of the casing and the sensing tube should be eliminated as much as possible. Such as SILVER CORIOLIS FLOW METER, 3mm and 6mm coriolis flow meter low flow, the mass flow sensor should be installed on a flat rigid base, such as a solid wall or a steel plate, to ensure that all four mounting feet of the mass flow meter are firmly on the same plane.  Mass flow meters from 10mm to 250mm ( 10 inch Coriolis mass flow meter) are installed directly on the process or pipeline when applied.
For liquid measurement, the typical installation method is that the flow tube is located under the process or pipeline. For gas applications, flow tubes are usually installed above the process or pipeline. Flow meters can also be installed on vertical lines, which automatically drain the liquid. Special attention is that in the application process, never use the joint of the instrument as the support of the pipeline, and support all bypasses and valves separately.
When metering fluids containing solid particles, the application should prevent solid particles from depositing in the curved part of the flow detection tube. When using at low temperature, such as cryogenic Coriolis flow meter , instruments technician should prevent the flow detection tube from frosting.
When measuring the two-phase flow of liquid and gas, special attention should be paid to the easy discharge of free gas when the instrument is applied and installed, because the flow in the measured liquid, Therefore, in such application process of the flowmeter, the Coriolis meter should be installed in a position with high pressure in the pipeline as much as possible to prevent the existence of gas in the liquid.
Since the Coriolis effect mass  flowmeter is a vibrating tube flowmeter, during the measurement application process, a sufficient distance should be maintained between the instruments, and the
Set up solid supports to eliminate the influence of mutual vibration.
During application, for corrosive fluids, especially those for chlorides with free halogens, use corrosion-resistant, heat-resistant nickel alloy mass flow sensors.
Install a downstream shut-off valve during application to ensure adjustment of the actual zero point of flow.
In the application process, the Coriolis Effect mass flowmeter, due to its novel concept, simple structure, high reliability, linear scale, high precision, easy cleaning, and convenient maintenance, can meet the special requirements of measuring fluids in many industrial sectors. , can directly measure the mass flow of the fluid, and can also solve the problem of mass flow measurement of multiphase flow and low temperature flow (such as liquid Nitrogen flow measurement). Because of this, it has come a long way in more than ten years. In today's world of flow measurement, it is indeed one of the fastest growing technologies, a lot Coriolis flow meter used in oil and gas applications. It can be expected that Coriolis effect mass flow meters will receive more and more attention and will be more widely used.

Leave a Message Email Us