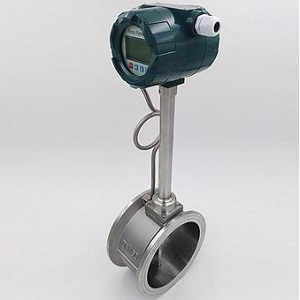 Vortex flowmeter is a fluid oscillating flow measuring instrument developed according to the principle of "Kaman vortex street". The so-called "Kamen vortex street" phenomenon is as follows: when one (or more) upstream surface is a bluff column in the flowing gas, the gas alternately separates on both sides of the column and releases two regular columns.. As early as the 19th century, physicists Strouhal and von Karman carried out fruitful research on the phenomenon of vortex street. Their research results show that the vortex separation frequency is inherently related to the flow velocity of the medium, the geometry and size of the vortex generator, that is, the vortex separation frequency is proportional to the flow velocity and inversely proportional to the width of the cylinder.
The principle of Karman vortex street inspired people to apply this principle to develop instruments for measuring gas velocity and flow rate. In the 1970s, Yokogawa Electric Corporation of Japan and East Company of the United States respectively developed the world's first vortex flowmeter.
Vortex shedding type gas flow meter has high accuracy, simple structure, convenient installation, good reliability, output pulse frequency signal proportional to the gas flow measurement value, no zero drift, convenient flow accumulation measurement, small pressure loss (compared to throttling flow) A series of advantages such as flowmeters) have been widely used and developed as soon as they appeared. Despite its short history, it has developed rapidly. It has become one of the mainstream gas flow measurement instruments in just a few decades, and is widely used in the measurement of various gas, steam and liquid flow. The electronic vortex shedding gas flow meter not only has a display to display the gas or vapor instantaneous flow and total amount of gas, but also can output pulse, frequency or current ( 4-20mA) for remote control and so on. Modern electronic flow instruments also have HART protocol and MODBUS RTU protocol for various process controls and communication.
Silver Automation Instruments Ltd offer low price vortex flow meter starts from $320.

Vortex type gas flowmeter can measure air, compressed air, vortex flow meter for natural gas, nitrogen, oxygen, biogas, coal gas, steam and so on. The gas vortex flowmeter can be equipped with a built-in temperature sensor, pressure sensor and flow totalizer to measure the gas temperature, pressure, equipped with flow computer to calculate the volume flow of the gas under standard conditions, or to calculate the mass flow of steam.


How does a vortex meter measure gas flow?

As mentioned earlier, when a columnar object with a bluff cross-section is inserted into the flowing fluid, two columns of alternating vortices will be generated from both sides of the columnar object. This phenomenon is called the "Kaman Vortex Street" phenomenon, as shown in the figure. 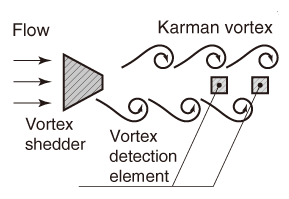 Studies have shown that the frequency of vortex separation is proportional to the flow rate of the gas and inversely proportional to the width of the cylinder, which can be expressed by the following formula
f=Sr×u/d
where:
f is the frequency of vortex separation;
Sr-coefficient (Strouhal number);
v—fluid velocity;
d—the width of the cylinder headstream.
It can be seen from the above formula that the fluid velocity and instantaneous flow can be measured by measuring the vortex frequency.


The structure of the vortex type gas flowmeter

Vortex flowmeter generally consists of two parts: sensor and converter, as shown in the figure. The sensor includes a vortex generator, a flow sensor, flow meter digital display, shell, etc.; the converter includes a signal converter, a signal amplifier, a connection terminal, a bracket and a protective cover, etc. 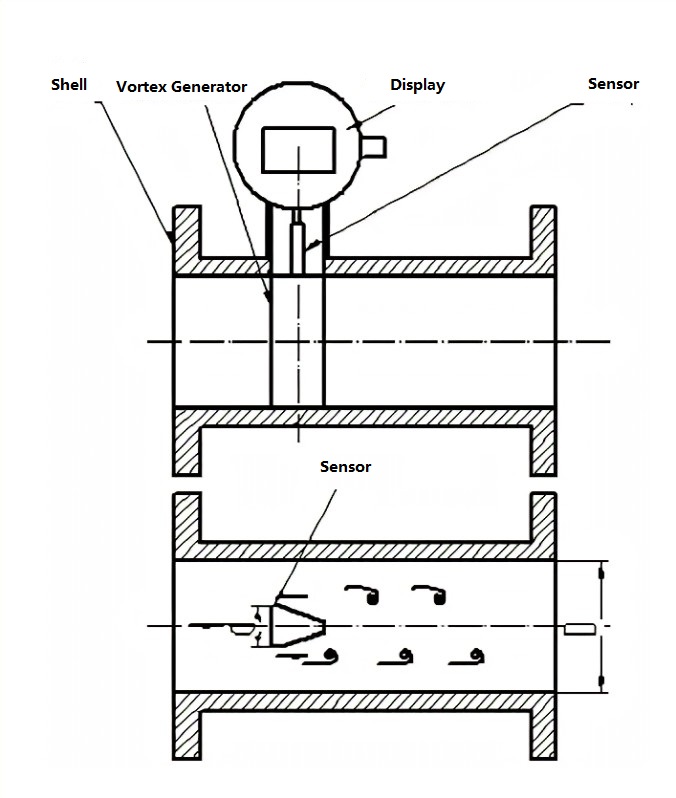