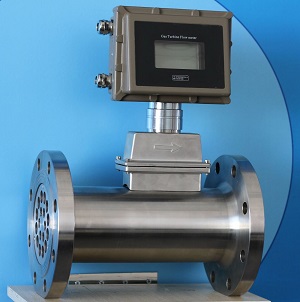 What is 6 inch flow meter?

6" turbine flowmeter is an inline flowmeter with a relatively large dial size. When the fluid flows through the flowmeter, the turbine blades rotate under the action of hydrodynamics, and there is a quantitative relationship between the rotation speed and the average flow velocity of the fluid. By measuring the rotation speed of the turbine blades, the flow or total amount can be deduced. The device for measuring the rotational speed can be mechanical, optical, magnetic, etc. Turbine flowmeters are generally composed of sensors and converters. Turbine flowmeters can measure air, water, natural gas, methane, Biogas, gasoline, diesel, fuel oil, utility oil, etc. DN150 turbine flow meter can be made with 4-20mA output, pulse output flow meter or with MODBUS RS485.

6 inch Vortex flowmeter is to place a vortex generator in the fluid, and the fluid is alternately separated on both sides of the vortex generator downstream to release two regular staggered vortexes. There is a certain quantitative relationship between the geometric size of the body, the geometric size of the pipe, and the average flow rate of the fluid. As long as the frequency of
the vortex is detected, the flow rate or total amount can be obtained. According to the different detection methods, vortex flowmeters can be subdivided into stress type, strain type, capacitive type, thermal type, vibration type, photoelectric type.,etc. Vortex flowmeter generally consists of two parts: sensor and digital flow transmitters. This kind of instruments can be used as 6" steam flowmeter, 6" compressed air vortex flowmeter, 6" water flowmeter. It can measure portable water, pure water, drinking water and so on. It can be with temperature and pressure compensation to realize steam or vapor mass flow measurement.

6 inch electromagnetic flowmeter is a flowmeter that measures conductive liquids based on Faraday's law of electromagnetic induction. In a closed pipe, a magnetic field perpendicular to the flow direction is set. When the conductive liquid moves in the direction of cutting the magnetic field lines in the magnetic field, an induced electromotive force will be generated in the direction perpendicular to the direction of the magnetic field and the fluid flow. There is a certain quantitative relationship between the size and the inner diameter of the pipe, the average flow rate of the fluid, and the magnetic induction intensity. As long as the induced electromotive force is measured, the flow or total amount can be obtained. 6 inch mag meter consists of two parts: mag flow sensor and converter, and is a very widely used flowmeter. The 6" flowmeter can measure sewage, dirty water, corrosive chemical liquids, sulfuric acid, hydrochloric acid, nitric acid, etc., and can also measure pulp, etc. 6 inch mag flow meter can detect liquid flow from 30-600 m3/h ( 132-2641 GPM).

Mass flowmeter usually refers to a flow meter device direct measurement of fluids mass flow, that is, the output signal of the flowmeter detection part directly reflects the mass flow of the fluid, and the Coriolis mass flowmeter is more widely used now. When the fluid flows in the pipeline, the fluid in the pipeline is still in a rotating system while moving linearly, and the Coriolis force proportional to the mass flow is generated. As long as the Coriolis force is measured, the flow rate can be obtained and total amount. According to the shape and number of detection tubes, Coriolis mass flow meters mainly include straight tube type, U type, Q type, S type, single tube type, double tube type and so on. Coriolis mass flow meters are mainly liquid measurement, especially suitable for high viscosity liquid measurement. 6" thermal gas flow meter can measure air and gas; it can be a 6" insertion type thermal gas flow meter, the price is very cheap. 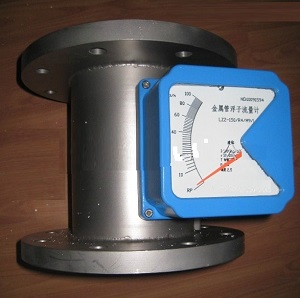 Rotameter also calls variable area flow meter, it is a special differential pressure flowmeter, which consists of a vertical tapered tube that expands from bottom to top and a float placed in the tapered tube that can move up and down freely. When the fluid flows through the conical tube from bottom to top, the float moves up and down with the change of flow in the conical tube, and the annular area between the maximum outer diameter of the float and the conical tube changes with the change of the position of the float. The pressure difference always remains the same. When the resultant external force on the float is zero, it is stable at a certain height, and the position of the float indicates the flow rate. During the measurement process, the float flowmeter keeps the pressure difference before and after the float unchanged by changing the flow area. The float flowmeter is also called a variable section flowmeter or a constant pressure drop flowmeter.
According to the material of the conical tube, the rotameter is divided into glass tube rotameter and metal tube rotameter. The float flowmeter can only measure the instantaneous flow, not the total amount. Additional transmitters are required to obtain instantaneous flow. The float flowmeter has a simple structure and mature technology, and can be used as small flow flow meter.

Leave a Message Email Us