Magflow flow meter (Electromagnetic Flow meters are abbreviated as EMF) is an innovative flow measurement instrument which has been developing rapidly as the development of electronic technology in 1950s and 1960s. Magflow flow meter is made according to the faraway law of electromagnetic induction. And magflow flow meter is an instrument used to measure volume liquid of conducting liquid. Thanks to its unique advantages, mag meter has been widely applied to measure the volume flow of all kinds of conducting liquid in the process of industry, such as varies of corrosive media like acid、alkali and salt. Mag meter has a flow measurement about diverse slurry, which urges it to form special application area.

Structurally, magflow flow meter is composed of mag meter sensor and converter. When the sensor is being installed on the pipe during the commercial run, its function is to turn the volume flow of the liquid which is going in the pipe into induced potential signal linearly. Meanwhile, it passes this signal to converter through the transmission line. The converter is installed on the place near the sensor, which will amplify the flow signal sent by the sensor and change into standard electrical signal whose flow signal can be proportional to others to output. After that, it can be displayed、accumulated and adjusted as well as controlled. 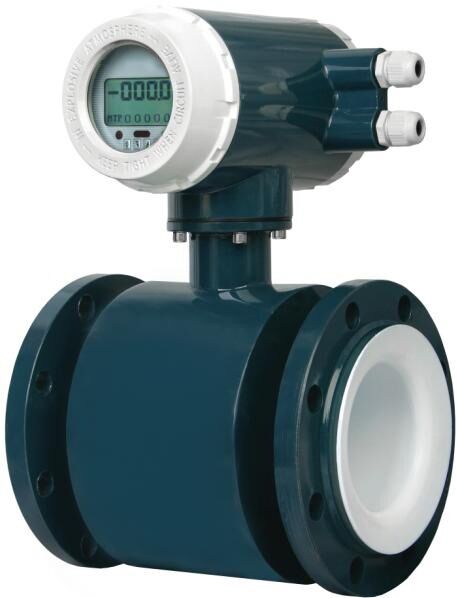 When non—magnetic pipe with the bore size D in the magnetic field where the intensity of magnetization B is perpendicular to the direction of it and the conducting liquid flows in the pipe at a flow rate u in the pipe, the conducting fluid cuts the magnetic lines, which is similar to this. If pairs of electrodes are put on both sides of the diameter which is perpendicular to conduit section（Figure 3—17）, it can prove that only the velocity distribution is symmetric one in the pipe can the induced potential be produced between the two electrodes:

In this equation, it is the mean flow rate of conduit section. And from it, we can get the volume flow of the pipe:

From the equation mentioned above, we can know that volume flow qv has linear relationships with induced potential e and the bore size D of the pipe. By contrast, it is inversely proportional to the intensity of magnetization B. It has nothing to do with other physical parameters. And this is the measuring principle of mag meter.


What needs to illustrate is that, if we want the equation（3—37）to set up strictly, the equation itself has to make the measuring conditions meet the following set:

① Magnetic field is a permanent one which is evenly distributed.

② The flow speed of measured liquid is distributed symmetrically.

③ The measured liquid is non—magnetic.

④ The conductivity of the measured liquid is even and isotropy.