Before we delve into the many uses and applications of the Coriolis flow meter and liquid mass flow meters in general, let’s examine how these mechanisms function. Coriolis flow meters feature narrow tubes hooked up to a small actuator, a small motor if you will. As liquid, or gas in many cases, is pumped through the tubes the small actuator vibrates. This vibration produces a measurable twisting force on the tube. By measuring this twisting force and comparing it proportionally to known masses of liquids and gases, scientists and technicians can get an incredibly accurate read on the mass of an unknown liquid or gas.

In terms of key features, all liquid mass flow meters will include some sort of tubular system through which the substance being measured will be pumped. In the case of Coriolis flow meters, the actuator acts as the linchpin in the mechanical process and it is that actuator and the vibrating motion it causes that are the hallmarks of any Coriolis flow meter. It is this motion, this vibration, that causes the liquid or gas to move in a measurable twisting motion. Only through measuring the force of that twist can scientists and technicians learn the subject’s mass.

While every Coriolis flow meter features tubes and an actuator, more and more we are seeing liquid mass flow meters that include more than one tube in addition to the normal attributes. Recent breakthroughs have led to greater implementation of a dual-tube system. Proponents believe that using two tubes rather than one creates an environment that is more sensitive to that fundamental twisting motion, ultimately allowing those concerned to deduce even more accurate measurements of mass than in the past. 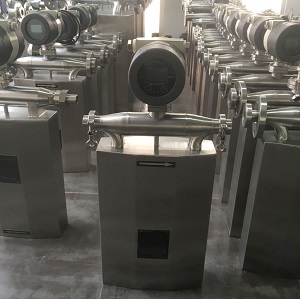 We hope this broad overview of liquid mass flow meters and Coriolis flow meters has proved productive and enlightening. These fascinating pieces of machinery are integral in many of the functions that sustain our everyday lives. Thank you for taking the time to read and we hope to see you again soon!