The magnetic Flowmeter market is mature and stable and yet advancements into new fields of application continue to be made. This has been prompted by the many new developments in the technologies used in flowmeters. One area in which advancement can most chiefly be pointed out is in handling caustic and sanitary fluids. China magnetic flow meter manufacture can produce stable quality and power function flow meters nowadays.
To appeal to the customer that is on a budget, easy to install insertion meters are appealing. To make these flow meters even more attractive, companies have been focusing on making these flow instruments "smarter" or more intelligent by providing flow meters or flow transmitters that have the features and technologies to support increased diagnostic capabilities as well as reliability. In general, however, as flowmeters develop, a greater focus is being placed on the longevity of the mag meter. 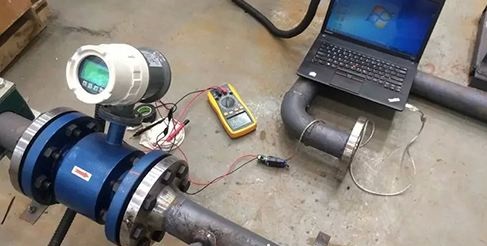 One way that this is being achieved is through the use of non-mechanical parts. For example, by using the hard rubber used for the flowtube of magnetic flowmeters, manufacturers are able to produce longer lasting flowmeters that are now able handle chemical and slurry liquids without failing.
Another area of electromagnetic flowmeter development is in their power consumption. Flowmeters traditionally have great power requirements. In order to allow for a flowmeter operating in a low power environment, a change to the wiring was implemented. Specifically, one such example can be seen in DC meters. By developing high strength DC meters, meters than handle dirty liquids, which traditionally have been handled by power hungry AC meters, as the nature of the liquid rendered regular DC current meters useless, can be handled by lower power DC current using meters.

Second, these meters are typically used in remote locations and locations in which they cannot be hardwired to a power source. Therefore they must have either their own in built power supply, in the case of battery operated flowmeters or be able to transmit their power wirelessly.

There have and will continue to be many advancements to flowmeters as needs change. As in all technologies, as current barriers are broken, new ones arise. One such current barrier for flowmeters is their applicability in situations in which non conductive substances are used. Such as oil and natural gas. To overcome this barrier, flowmeters that can feed a greater amount of power to it's magnetic coil are being developed.
The hope is that flowmeters can be applied to larger areas of application if they are able to detect a greater range of conductivity.